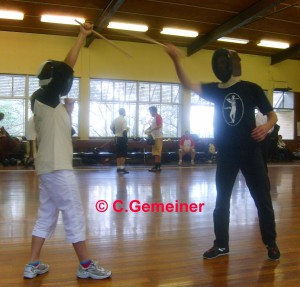 History was recently made in the sunshine state with the first ever Australian la canne (French stick fighting) championships held in Brisbane, Australia.

20 competitors from around Australia fought under the guide lines of the la canne Vigny method for a total of 30 bouts. Since the early twentieth century a number of police, military and martial art academies have utilized the Vigny system of stick fighting for their own use.

These groups included the Bartitsu School of arms and physical culture, the Indian Police force along Kapap and Pal’mach Special Forces. Today the system is being spear headed world wide by the Gemeiner martial arts academy.

The academy recently implemented its long distance la canne training option for national and international students who do not have access to qualified instructors.

The program has been designed to offer top quality training outcomes specific to la canne Vigny method. Prerequisites for individual instructor’s licences have been built into the programme which is currently not available anywhere else in the world.

Scoring was based on both technical points gained for correct style, along with points for successfully striking allocated targets. This scoring system is commonly used in savate tournaments and proved highly popular with competitors as it rewards fighters who make the effort to utilize proper la canne Vigny techniques.

At this year’s event la canne fighters demonstrated a high degree of skill and in the true Australian spirit of “having a go” fought hard and furiously through out the day.

All bouts were judged by la canne Vigny instructor and president of the Australian Savate Federation Inc. Craig Gemeiner.

The la canne tournament, part of the larger AHSF convention proved so popular that plans are already under way for next year’s event which is to be held in Melbourne 2007.