The traditional system of French stick fighting using the gentlemen’s walking stick is called “La canne.” Adopted into Savate salles during the early 1800s la canne integrates skills from the saber and cut and thrust sword. The walking stick was not only an indispensable fashion accessory but in trained hands a formidable weapon.

Practiced for fencing and self defence, la canne is a balance of technique, timing, distance, and tactical appreciation which employs a full range of bio mechanical characteristics that are unique to this weapon.

The Gemeiner Academy comprises less than a handful of salles in Australia offering credible tuition in the French art of La canne. To ensure optimal training outcomes we specialize in private and small group lessons.

La canne is fun and easy to learn and suitable for men, women & teenagers.
Private lessons and seminars are available in the French sport of Canne de Combat and the self defense method called La canne Vigny. 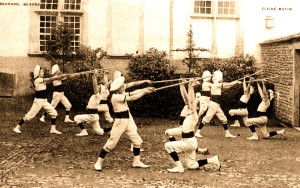 Le baton (Baton) is the French two handed long stick which derives many of its skills from the two handed sword. A simple yet highly efficient weapon Le baton was integrated into the French army regiments and Savate salles during the 19th century. Training in Le baton offers a variety of offensive and defensive applications while improving physical coordination and instilling confidence in weapon handling. Self defence potential includes cross over application to many everyday items.

The French Baton system taught at the Gemeiner Academy is based on the “Joinville Le Pointe” military baton method. This method contains a history and tradition that can be traced back to the early 1800s where its use was an important part of officers’ physical training .The Joinville method was also introduced into both public and private French schools as part of the standard physical culture syllabus.

Le baton is fun and easy to learn, private lessons are available for men, women & teenagers. 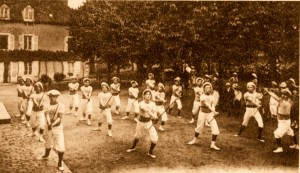